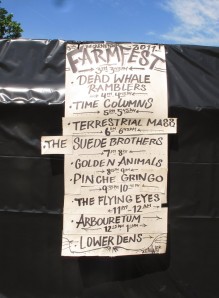 Prologue: We were given the opportunity to experience an event that embodies what we here at The Soda Shop try to promote; small bands from several states gathered to do what they do best, and that is to play music in front of fans that want to be filled by the music. The music and attitude seen at this show gave me a glimpse of what it must have been like at Woodstock ’69, but on a smaller scale… for now. Hopefully, this small festival can continue to grow while maintaining this spirit. One can only hope that this generation gets a chance to have our own Woodstock. — Jake

Words and photos by Caleb Danko

Early afternoon, and the sun is well above the tree line by now; the open countryside hill starts to really heat up as the first band takes the stage. Immediately sweating and Miss Madi leading, the Dead Whale Ramblers make few short remarks as they jump into the day’s festivities. An ensemble including a beautiful upright bass, a violin armed female, a banjo picker, and a tambourine player in addition to a much needed and greatly appreciated horn player topping it off.  I found the simple and honest vocals of Madi to really compliment the choice of instruments. While many female lead vocals are found emerging from the South by South West (SXSW) festival in Austin, Texas, I enjoyed the fresh and original songwriting, playing off the eclectic, country-roots, folkish musical elements. A fabulously easy-on-the-ears sound leads to a distinctive female lead cast that will have travelers and lovers of folk coming back for more. This first set, The Dead Whale Ramblers a great success in my mind, wherever genre you may stick them.

Following the ‘Ramblers set, a two man wrecking crew of guitarist and percussionist, complete with pedals and gadgets galore, Time Columns fill the grounds with a bouquet of wildly rhythmic strings and percussions. A quick introduction, sporting a live album remix, and EP for FREE (available at timecolumns.bandcamp.com), and they jump right into their second song. While mostly instrumental they fill the air with what I am quick to regard as a distinctively east coast sound, aided (presumably) with the electronics, they make quick work of filling the space with plenty of sounds.

Fast forward to the fourth set, The Suede Brothers take stage. Formerly seen in our very own Detroit, and the fabulous set they delivered then, they quickly assume power and live up to their reputation as great musicians. Penetrating guitar leads, and rhythm, often breaking for well-timed guitar interludes of battering bar chords. Even for a player so youthful, his well placed guitar works, balance the space between the airy and distinctive vocals, completing with flourish the dominating original rock-n-roll soundevery band desires to nail on the head with ease, the way in which they do. Great rhythm and prominent stage presence force me to give major props to a group of three guys whose sound could easily quantify and entire sub-genre of the most publicly accessible rock-n-roll.  Simply put, they were very easy to listen to.

Making way to the next set, Pinche Gringo  takes stage in a beer drinking, whiskey swilling, blues fueled frenzy; the likes of which is for the record books. Thrashing around on a vintage “Kay” electric guitar, a blur of tattooed arms, propel the stomping and blaring one-man show. The air filling with the enchantingly sorrowful vocals, they mix with the stomping and rattling percussion, while the strings scream out in torment for their bearer. The lead vocals and guitars pumping out a powerful bluesy to rock-n-roll back and forth banter bordering on the maniacal.  Without a doubt, our friend Pinche Gringo taking the low road of heartache in songwriting for the pure bliss of anyone lucky enough to witness. If you missed this performance, YOU, reader, missed something truly engaging.

Cue smoke. Dial up lights, and start the strobe. Strum in guitar reverb, emerge in fog, The Flying Eyes.  Taking stage late in the evening, The Flying Eyes were one of the first bands of the day to address this drunken and disorderly mob of fans, in the dark, an enthusiastic combination of dark and nature, complementing the original, bluesy, dark, moody tones of The Flying Eyes. Lead singer’s, Will, vocals a throwback to the drowning harmonies of The Doors, a sound with drawn out vocals, slide guitars, and plenty of noise filling the compositions; an elegant return to the days of vinyl. Halfway through the set, taking from their most recent album release, Done So Wrong, they jump into a favorite song of mine, “Overboard”. Smoke begins to pour out and circle their limbs, banjo plucking begins, and soon accompanied by Adam’s lap steel, whining and drawing out lonnggg aching notes, sending us deeper and deeper into the ethereal rabbit hole, and shockingly the crowd smacks the floor as Will’s vocals led into an accompaniment by the rest of the band. Back into the lap steel the whole crowd enthralled as a small guitar interlude and instrumental leads us into the tail end of the piece, the viewers swaying rhythmically in time with the fantastic-ness of it all. What a great set it was,  this band having been featured on many different events, are quickly gaining acclaim in the United States, while even more so in Europe. This group of young men are consistently proving themselves to be well educated in sound, and dare I say even old-souls in the way they communicate to their viewers. They make use of a perfect time after dusk, taking full advantage of the already warmed up crowd, getting a great response, they tear up the place with dignity; truly a great performance of the night. Eventually they finish the set, leaving the crowd wet for more, retiring for the evening in the backstage, and around the grounds, slowly sipping that great, cold first draw of a newly tapped keg post-performance.

Arbouretum and Lower Dens played out the rest of the festival’s sets, as both bands took the opportunity to infuse their psychedelic sounds with the alcohol and THC coursing through the veins of those still standing after a long, sweltering hot day of music and vice in the Maryland sun. What would the night be if it ended there? The sets may have been played but the night continued on, and so did many of the festival-goers. The rain clouds eventually came to breathe life back into everything though the sun had long since set. The ground dampened, but not the spirits of those that still persevered, music and chatter could still be heard in the wee hours of the morning.

The chatter turned into moans as people felt the after-effects of the previous day as they slowly packed up their tents and left the grounds as quickly as they arrived. The farm empty, and The Flying Eyes performing the the janitorial tasks of a gracious host, the festival was over. The months of planning and preparation for a short 24 hours of fun appears to be well worth the trouble, a success in everybody’s eyes. Another great experience and many new friends made, we are thankful for the opportunity to experience such an amazing event. I’ll leave you with these parting words: you better not miss Farm Fest VI.