I love it when bands submit albums for review, especially when I had never heard of the band before. One such case is Love Mound who has been around for a few years already and put out an album in 2005 (Blackbird).

Love Mound also comes highly recommended to me from drummer extraordinaire Kenny Wagner. So upon both the submission ad Kenny’s recommendation, I listened, and listened, and listened. This is another one of those hard rock albums that hooked me right away that my player’s repeat button got stuck. The sound on the album is hard rock with a bit of country and southern rock mixed in for good measure. The Noose, The Tree, And The Desert Sky is a delightful listen from start to finish. It’s full of harmonious vocals, plenty of killer drumming, catchy bass lines and killer riffs, some of which get stuck in your head. 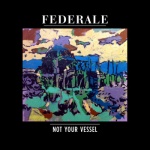 Federale was first suggested to me a few years ago by the guys in Strange Haze. I was told “If you like our stuff, you’ll dig them.” Sure, why not. A visit to their Myspace page and a few tunes in I was hooked. Their 2007 self titled album was excellent and hands down one of the best albums I had heard that year. Here we are 4 years later and they have just released their follow up album titled Not Your Vessel. So did the long wait pay off? Was it worth the wait? In one word, Yes! In 2 words, Hell Yes! Federale, for those who are new to them, are from New York, they play rock and roll with lots of classic 70’s rock influences including what sounds to me like a little Allman Brothers in there (just listen to the instrumentals in “Sir, You Realize”). While not heavy or really aggressive, Federale tend to play some fine rock. At times I’m reminded of Kamchatka only a tad bit faster. Not Your Vessel is one of those albums that stick with you long after you’ve turned the album off. I’ve woken up a few times with riffs from this album as well as finding myself humming the tunes throughout the day. It’s catchy, damn catchy.

Hogjaw are back with their 3rd album Sons of the Western Skies. I’ve been listening to this album on and off for a few weeks now and I can say it’s pretty enjoyable. For those who don’t know, Hogjaw play hard southern country rock. Think a mixture of ZZ Top, The Allman Brothers, a little Molly Hatchet and there you go. There’s a newer sound to their tunes to give it a fresh sound and not sound like their trying to imitate a certain band or era of music. Sons of the Western Skies continues their sound from previous albums. Perhaps it’s a little more aggressive than past material but not a heavy album. The guitar work is excellent (listen to “Six Shots”), the drumming is top notch and spot on. The album does take a bit of a turn experimenting a little bit with a saxophone and getting a bit of a 70’s funk on with the track “Everybody’s Goin Fishing.” At first I wasn’t sure it really fit but after a few listens, it’s an awesome track. It reminded me of early material from (the band) Chicago (before they went all soft). “The Sum of All Things” is the last song to finish off the album. It reminded me of a mix between Lynyrd Skynyrd’s “Simple Man” and “Freebird.” It’s a lot mellower than those two but it has that distinct sound that Skynyrd is known for.

The album is available right now on cd through CDBaby and digitally on iTunes. An LP is planned for a future release. This is one of those “must get” albums!

Heavy Manic Souls have a new self titled album out. This one is different. It’s very heavy in the blues based rock but contains different elements such as country, southern rock and funk. The influences are quite obvious with Hendrix, Lance Lopez and Clapton but Stevie Ray Vaughn being the biggest. It’s almost as if SRV was still alive and well playing today. The band is from France, not where you would expect a band with this sound to be from but they make it work and work well. I also got hooked after a few listens in a row. Listen for yourself and you’ll see.

This entry was posted on February 16, 2012 by Bill Goodman. It was filed under Album Reviews, Current Rotation and was tagged with Blackbird, blues, blues rock, Country Rock, Federale, Hard Rock, Heavy Manic Souls, Hogjaw, Love Mound, Not Your Vessel, Sons of the Western Skies, southern rock, Stoner Rock, The Noose The Tree And The Desert Sky.