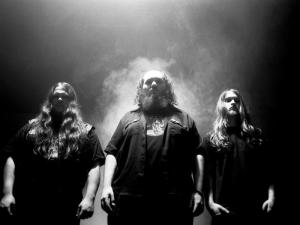 Rhode Island doom bringers PILGRIM will appear live on East Village Radio’s Metal Inquisition Show this Tuesday, February 28 from 10:00PM – 12:00AM EST. For the first half of the show, the band will be spinning tunes from their own playlist. During the second half, PILGRIM’s latest full-length, Misery Wizard will be played in its entirety. To hear the show, go to THIS LOCATION.

PILGRIM will be leveling the East Coast this March with their soul-searing bottom-end before making their way to Europe in May. Confirmed dates thus far are available below.

PILGRIM are the latest addition to the Metal Blade roster via Primordial frontman Alan Nemtheanga’s imprint, Poison Tongue Records. The doom trio consists of: Krolg Splinterfist, Slayer of Men on drums, Count Elric the Soothsayer on bass guitar and The Wizard on guitar and vocals. With a mix of destruction, misery and beauty, these young disciples of doom blend a surprisingly original sword ‘n’ sorcery feel with the classic chest-caving heaviness of the masters, Black Sabbath, Saint Vitus, Reverend Bizarre and Pentagram.

“…an absolutely brilliant album consisting of six epic, fantastical tracks of crushing, deceptively hypnotic and magical doom where no singular highlights exist – each track can stand alone – because the entire effort is a highlight.” – Terrorizer

“…in a realm where the old-school and the experimental push against one another in an eternally dynamic non-equilibrium, it’s certainly not about who your influences are. It’s, of course, about how you use them. PILGRIM simply have fun with these predecessors, renewing old sounds with the zeal of teenage boys worshipping cheap Sabbath posters on their bedroom walls and the skills of players who’ve been at this for a while…” – Pitchfork

“…an impressive offering from a young band.” – Powerline

“This is true doom metal, not the hybrid bile that so many bands are passing off as doom these days. The monster riffs will bludgeon you senseless and shake you to the core, but you’ll keep coming back from more, willingly and repeatedly.” – Pure Grain Audio

“…slow, ponderous, crushing doom, owing much to vintage Black Sabbath, Saint Vitus, Pentagram, and the like. Ominous riffs, pounding rhythms, and haunting vocals make up the formula here, and tracks such as ‘Quest,’ ‘Astaroth,’ and ‘Masters of the Sky’ mix up the slow motion death marches with speedier dirges for a wild ride.” – Sea Of Tranqility

This entry was posted on February 27, 2012 by Bill Goodman. It was filed under Live Shows, News, Tour Dates and was tagged with Doom, doom metal, doom rock, Misery Wizard, Pilgrim.