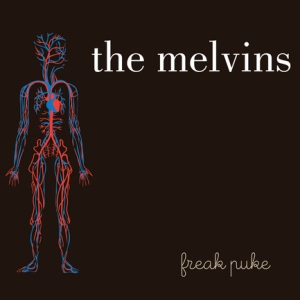 Melvins Lite is an additional incarnation of the Melvins.  The line-up is Buzz Osborne, Dale Crover and Trevor Dunn (Mr. Bungle, Fantomas & Tomahawk).  Melvins Lite’s debut release is “Freak Puke,” available June 5 via Ipecac Recordings.  “The Melvins have a long history of mixing up our line-ups and I think that’s what has kept us relevant for so long,” explains Osborne.  “Consider the Freak Puke record the fifth side of the four-sided Melvins triangle.”

“Leon vs The Revolution” mp3 via Spin.com:

Greece might not be the first place that comes to mind when you think of sludgy stoner metal… or the second, fifth, or tenth. But Weathers is out to change your mind about that. They might come from the windswept isles of the Mediterranean, but listening to their debut EP, you’d swear the trio were raised inside the hollow of a petrified sequoia tree by a pack of ancient dire wolves.

The sheer heaviness of Heavy Truck is truly something to behold. It manages to be completely thundering at its low end, while not sacrificing the searing buzz saw guitar lines that so often are thrown out the door for such bottom-heavy production. Nothing comes out muddy–just fuzzy, and deliciously so. Reminiscent of the sound of their European brethren, Sweden’s Truckfighters, the Greek three-piece wear their influences on their sleeves (I mean CD sleeves–that’s not a maple leaf there) and make it easy to forget that they’re exactly that: a Greek three-piece. END_OF_DOCUMENT_TOKEN_TO_BE_REPLACED

Toby Cook of The Quietus recently conducted an interview with Matt Pike of the San Francisco Bay Area hard rock band HIGH ON FIRE. A couple of excerpts from the chat follow below.

The Quietus: The title of the [new HIGH ON FIRE] record, “De Vermis Mysteriis”, obviously has links to the grimoires of Robert Bloch and H.P. Lovecraft, but the concept is based around the idea that Jesus had a twin who died at birth, and then became a time traveller, right? Can you clear up what the fuck’s going on there?

Pike: Yeah, well, he died at birth so that Jesus could live and then forwards himself through time and sees the destruction that Christianity causes and tries to travel back in time to warn his brother — who’s innocent of all this. But there’s lots of little factors in between that are Lovecraft-ian, END_OF_DOCUMENT_TOKEN_TO_BE_REPLACED

May 3, 2012, Philadelphia – Baroness, currently on tour previewing material from their forthcoming album Yellow & Green (July 17, Relapse Records), have posted a trailer for the upcoming release (http://youtu.be/JqszuA8bLZ4), giving listener’s their first hint of music from the eagerly anticipated album.  END_OF_DOCUMENT_TOKEN_TO_BE_REPLACED

The Heavy Eyes are back with a 2 track demo from their winter recording sessions. It’s only 2 songs (thus the “2”) but they already shows signs of a refined sound. Excellent music as always!

END_OF_DOCUMENT_TOKEN_TO_BE_REPLACED

Hey all, we just wanted to send out a quick email with our updated shows list. Please make it out to one or more if you can!

Colornoise is a noise rock duo formed by Sonya Carmona (Lead vocals, guitar) and Alison Alvarado (Drums, vocals). The style of the band is strongly marked by genres such as stoner rock, grunge, garage and post punk.
The project started in 2009 when the girls created a couple of songs in jamming sessions that they enjoyed playing for friends. Being only two, they decide to make their first album.

END_OF_DOCUMENT_TOKEN_TO_BE_REPLACED

The Soda Shop
Create a free website or blog at WordPress.com.