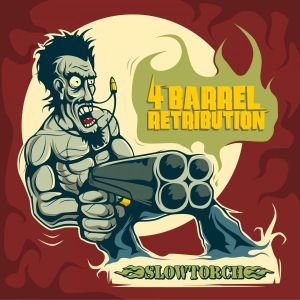 The boys are back. Slowtorch have just released a new EP called 4 Barrel Retribution. Those that like hard and heavy hitting Italian rock with massive riffs and in your face vocals are going to love this one.

The EP has 4 tracks. “La Vaja” is, as the band states “A statement on the band’ style: massive riffs that never drift.” It’s an intensive driven song. “27” is a song written by fallen musicians who have passed way before their time. The band doesn’t mention any names, musicians such as Jim Morrison, Kurt Cobain and Janis Joplin come to mind. “10.000 Tons” and “Lords of Tomorrow” is both a “declaration of protest” and “the attack in its wake.”

I’m not going to lie, this  is a strong EP well worth it’s weight in gold. It’ll kick you ass up and down, left and right. There is a hidden track to add some bang to your buck although the song is a bit different sounding then the rest, but it’s good no worries. I’ll leave it up to you to hear it. You can get the CD or digital download through CDBaby.Go, get it today!

This entry was posted on August 9, 2011 by Bill Goodman. It was filed under Album Reviews and was tagged with 4-Barrel Retribution, Hard Rock, itialy, Slowtorch.